The Lustre Kings boast a devoted international fanbase and continue to perform over 150 dates a year, including regular stops at nightspots, festivals and casinos like Tip Top Deluxe, Skinny Dennis and The Continental Club; Viva Las Vegas, Heritage Folk Festival and the Rockin 50s Fest; and the Potawamoti Hotel. Gamsjager, a Gretsch guitars endorsee who has taught for the National Guitar Workshop, has been a guest at prestigious venues ranging from Kennedy Center (Washington DC) to the Montreal Jazz Fest.

Beginning with 1995’s Mark Gamsjager Rocks & The Lustre Kings Roll, the band staked a claim to a modern take on the reverb-driven sounds of early rock, leaning also on touchstones of country, blues and R&B. Other artists, like the famed “Queen of Rock,” Wanda Jackson, hear the authenticity in The Lustre Kings. Perhaps that’s why she hired Gamsjager and the group as her backing unit for many tours. “I have worked with many bands around the world through the years,” Jackson says, “and none are better than Mark Gamsjager and The Lustre Kings. Their fine showmanship and musical ability make them the greatest in my book. They rock!!” 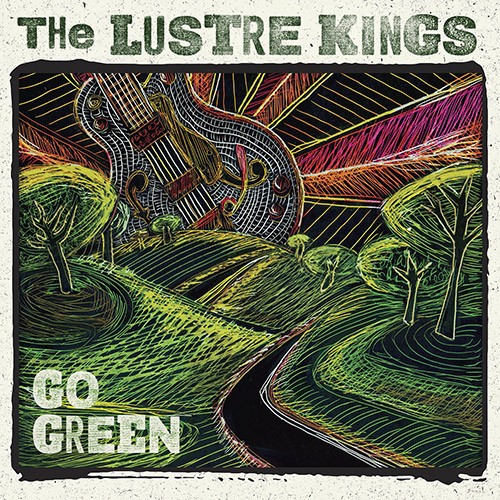 Go Green is the band’s fifth long player, and it caps 20 years of touring—from New York to New Orleans, and from Boston to Belgium and beyond. Along the way, The Lustre Kings have matured into one of America’s great roots rock combos, with a distinctive sonic stamp courtesy Gamsjager’s Gretsch and his great big voice.

The album’s opening track, an energized rip through The Rockats’ “50 Miles from Nowhere (1,000 Miles from Home),” fueled by Mike “Chops” LaConte’s thrumming upright bass, has found a place at radio, landing, for example, in WEXT’s Top 10 for 2015. And all of Go Green—elected The Daily Gazette’s #1 album for the same year—is ripe with hot tracks, ranging from Gamsjager’s hopped up take of Gordon Terry’s furious chestnut “It Ain’t Right,” to Horton’s 1959 rocker “First Train Headed South.”

Covering Go Green for the Rochester Sun Times, reviewer Frank De Blase pegged it, saying, “The tall man with the snowy roof leads the charge with a reedy vocal twang and a big bad guitar comin’ at you through vintage tube and tweed. The whole band, plus assorted guests, is lint-and-spare-change-deep in the pocket. I dare you to sit still with this record on the hifi.”

Nippertown.com hailed the Lustre Kings’ “masterful ability to swing” on tracks like Turner’s “Boogie Woogie Country Girl” and bluegrass kingpin Jimmy Martin’s “You Don’t Know My Mind.” The fact that, as a young Long Island bluegrasser himself, Gamsjager once sat knee to knee with Bill Monroe, certainly didn’t hurt on the latter.

Metroland called the album “a whopper,” noting, “The first thing that will hit you is the sound; big, luscious and right,” and continuing, “Like their soulmates, the late, lamented Morells, the Kings dig deep to find swinging obscurities that are a couple steps to the left of normal, and then serve them up with a wink and a spit-shine … Go Green is a great rockabilly record doubling as a master’s thesis on Americana weirdness. That you can dance to.”

And alt.country bible No Depression preached, “The good-time sounds purveyed by Gretsch-slinger Mark Gamsjager and company swing, bop, and wheel in formidable fashion, so enthusiastically so that the world’s hardwood dance floors surely fear The Lustre Kings.”

Atlanta’s Creative Loafing got it right when they said, The Lustre Kings have a sound so powerful, it leaves listeners hungry for more.”

This website uses cookies to improve your experience while you navigate through the website. Out of these, the cookies that are categorized as necessary are stored on your browser as they are essential for the working of basic functionalities of the website. We also use third-party cookies that help us analyze and understand how you use this website. These cookies will be stored in your browser only with your consent. You also have the option to opt-out of these cookies. But opting out of some of these cookies may affect your browsing experience.
Necessary Always Enabled
Necessary cookies are absolutely essential for the website to function properly. This category only includes cookies that ensures basic functionalities and security features of the website. These cookies do not store any personal information.
Non-necessary
Any cookies that may not be particularly necessary for the website to function and is used specifically to collect user personal data via analytics, ads, other embedded contents are termed as non-necessary cookies. It is mandatory to procure user consent prior to running these cookies on your website.
SAVE & ACCEPT